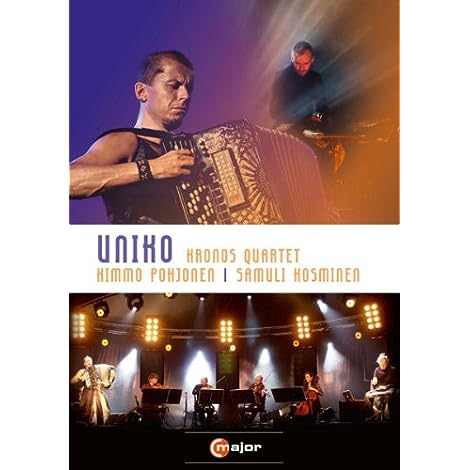 Kimmo Pohjonen’s Uniko project with the Kronos Quartet was a TOTW album in #75. This magnificent DVD of their performances at the Helsinki Festival in 2004 show what an extraordinary piece of music this is. The music created by accordionist Pohjonen and hid electronic drum pad colleague Samuli Kosminen simply transcends borders. It is folk, avant-garde, classical and unlike anything you’ve ever heard before. This DVD of the concerts at the Helsinki Festival is very well directed and filmed to bring the excitement of the music across – not an easy task with six seated musicians on stage. But body-building accordion wielder Pohjonen looks muscular and powerful. Kosminen gets into his drum pads and Kronos look extremely dynamic too, with big close-ups of bows on strings and dramatic crash zooms.  With a narrow depth of focus that brings out the drama of this music and great sound, it clearly shows what quality filming can do compared to the YouTube perspective. There’s also a very good “Making Of” bonus DVD with good interviews from Pohjonen, Kosminen and Kronos. This is a DVD that really takes you into an extraordinary concert and the creative work surrounding the music. Simon Broughton